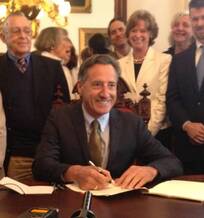 Vermont's Act 39, entitled Patient Choices at End of Life, was passed on May 20, 2013, when Vermont became the first state to pass a death-with-dignity (DWD) law through the legislative process. Oregon and Washington State passed similar laws by referendum, but this process was not available under Vermont law.

The history of Vermont’s Act 39 is one of dedication and persistence on the part of many people, but especially Dick and Ginny Walters, founders of Patient Choices Vermont. Their work began in 2002, based on the Oregon Death with Dignity Act, which had been in place for five years and was working well. With the model of the Oregon Act and their long-held strong belief in freedom of choice, they believed that Vermont could enact similar legislation. They were both 77 years old and had no idea that it would take eleven years to pass the bill and another two years to solidify it.

Dick and Ginny were motivated to work for a DWD law because, like many others, they had relatives who had suffered. After a severe stroke, Dick’s father begged for help in dying, which no one was able to provide. Ginny’s cousin, dying of cancer, pleaded, “Why is it taking so long?” Among early strong supporters were a brother and sister who mourned their sibling who, in desperation, had taken his own life with a gun.

Dick and Ginny educated themselves on the legislative process, and based on numerous meetings in their living room a small group formed a 501(c)(4) corporation. Their daughter, Betsy Walkerman, an attorney who is now President of PCV, drafted the first Vermont bill following the pattern of the Oregon Death with Dignity Act. Their daughter Nancy Hawley set up PCV’s first website.

As the issue moved forward in the legislature, opponents stated that Vermont was targeted by a national organization to pass this law. This was far from the truth. Vermont’s death with dignity movement was Vermont-based from the start. Dick and Ginny, knowing that Vermonters, who see themselves as independent thinkers and would not want to be directed by outsiders, made sure that the organization maintained and displayed its clear Vermont roots.

PCV enlisted the assistance of national organizations to make use of their experience. Both Death with Dignity National Center and Compassion and Choices helped with advice, telephoning, funding, and – very valuable – Oregon people who flew in to testify in legislative committee hearings. Among them were a rabbi, the head of the state hospice organization, and a researcher from Oregon Health & Science University who worked extensively on the statistics in Oregon.

From the beginning, PCV’s Board of Directors included professors and medical doctors. All were committed to the mission and worked persistently through many years, enabling the group to become closely-knit. Early in the process, Dick and Ginny were introduced to the lobbying firm of Sirotkin and Necrason (now the Necrason Group), with whom PCV developed a close and lasting relationship. Their steadfast dedication, invaluable expertise and guidance in strategic planning was critical to our organization’s success.

In 2004, at the request of the legislature, the Vermont Legislative Counsel studied Oregon’s Death with Dignity law and published a report detailing its efficacy and positive outcomes. Through 2009, legislation was proposed in the Vermont House and Senate, and committees in both chambers conducted extensive hearings. PCV organized written and verbal testimony by a wide range of people, including people experienced with the adoption and implementation of the law in Oregon, and numerous individuals with deeply personal and family stories. The underlying theme was freedom to choose. Repeatedly, independent polls showed Vermonters favored the bill by two to one, across political parties and religions. Many individuals with disabilities testified in favor of the legislation because people with disabilities, like everyone else, want to control their own medical decisions when diagnosed with a terminal illness. Opposition was strong and vocal, raising a number of concerns.  PCV persistently presented the facts from Oregon.

PCV worked strategically through the years to build knowledge and support among legislators and legislative leadership. It took time and citizen action to educate representatives about freedom of choice at the end of life. Throughout Vermont, the proposed legislation gained attention and supporters because of letters to the editor and media accounts.

PCV Board members spoke at Rotary Clubs, at gatherings at the homes of supporters and at professional meetings of healthcare providers. PCV expanded its database of supporters by setting up DWD displays and collecting signatures at Town Meetings, which take place every year throughout Vermont in the month of March. Among PCV’s thousands of supporters were activists who contacted legislators, wrote letters to the editor, and contributed to the campaign. During the most active part of the campaign, PCV activated its supporters by organizing telephone trees, updating the website, posting on social media, using email and snail mail and placing TV ads.

Although the Vermont Medical Association testified that Act 39 was not needed, PCV developed a list of 200 supporting physicians. They understood that for the terminally ill patient, just knowing that it’s legal to avoid a protracted painful dying process brings peace of mind.

By 2013, Vermont had a Governor who was a committed advocate for DWD. The Speaker of the House, a strong and determined leader, also was eager to see the legislation passed.

To achieve a majority vote in the Senate, a compromise consisting of a “sunset” provision that would have allowed most of the safeguards to disappear in 2016 was necessary. PCV celebrated passage but was concerned that weakening the required safeguards would make the law vulnerable to repeal.
In 2015, Act 39 was revised to remove the sunset provision, and the final bill was signed on May 20, 2015, thereby solidifying Vermont’s Act 39. The Governor, the House Speaker, legislators and thousands of ordinary Vermonters came together to establish the Patient Choice at End of Life Act.

PCV would like to recognize the contributions of its past directors and advisory board members: