ACAMAID.org | Great videos and guidance for both patients and caregivers

The American Clinicians Academy on Medical Aid in Dying has launched a website which includes some great videos and guidance for both patients and the medical community. In particular, we would recommend this video, which answers the question “What is it like on the day you take your medication?”
Aid in Dying at the Bedside

Prescription for Peace of Mind: An option for the terminally ill,
a new documentary by Karin and Bill Schwanbeck
Featuring Dr. Diana Barnard, Peggy Stevens and PCV President Betsy Walkerman, along with patients, doctors and others in Connecticut. 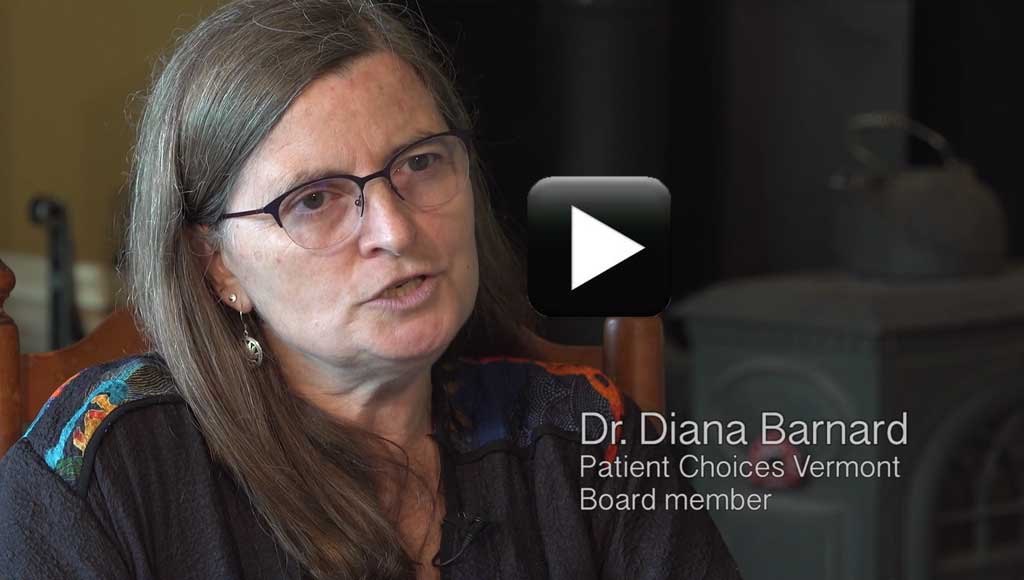 Patient Choices Vermont is pleased to sponsor the Living While Leaving  video series to share the heart-felt and compassionate stories of Vermonters who have used medical aid in dying.

Al Gillotti used Vermont's Act 39 because the prognosis was that his brain tumor would continue to grow and it would only become worse. He believed death is part of life and wanted his leaving to be joyful rather than stressful. He did not want to end his life in palliative sedation. He wanted to meet the beast on his own terms.

A discussion between:
Betsy Walkerman, President Patient Choices Vermont
Susan Gillotti, Al's loving wife of 56 years
Jan Hutslar, Unitarian Universalist minister
Phil Kern, Family friend
​The two films (below) are the second in our series... They feature a dialogue with wife and mother Peggy Stevens and daughter Samantha Stevens regarding Eric Stevens, husband and father. The interview is conducted by Betsy Walkerman, PCV President. These films were created by Stephen Kastner at DesignWise Studios, videographer and editor with music by Eric Stevens (and his band in Part 2).
Part 1
Part 2
The first video in the series (below), is an interview that spans three generations: with wife and mother, Ginny Walters, co-founder of PCV; her daughter Betsy Walkerman, President of PCV and daughter/granddaughter Karen Walkerman. It is the story of Dick Walters, also co-founder of PCV, his relentless advocacy and his journey at the end of his life using medical aid in dying.

Please, contact us if you would like to share your story.
Are you an individual near the end of life, or a caregiver?   Were you close to someone who used or considered using Act 39?  Others may benefit from your experience and insights.  (Please recognize that not all stories will be suitable for posting.)

Burlington, Vermont, July 27, 2015 - Burlington, VT resident Barb Bardin wanted to share her story in the hope that it would help others.  WCAX Story.  Please note that some of the details of Act 39 are incorrect (no one has to swallow 100 pills).  However, the story is still meaningful.

Terri Hallenbeck | Seven Days | June 4, 2015
Read in full at Seven Days
[…] After initially being diagnosed with Parkinson’s disease in 2007, Yumoto learned in 2011 that she had multiple system atrophy, her obituary says. That is a degenerative condition that diminishes the body’s involuntary functions, including heart rate and digestion.
“Kimiko chose to end her life through physician-assisted suicide under Vermont’s Patient Choice and Control at End of Life Act (Act 39),” the obituary says. “Kimiko left us on the day and in the manner of her choosing, but long before her time.” […]